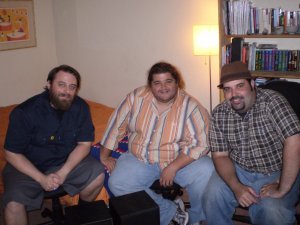 ☤Join Ben and Ralph, with special guest Jorge Garcia, as they talk about what they each think will happen in the upcoming Season 3 finale of Lost. Ben and Ralph do a “quick” interview with Jorge, talk about some of the behind the scenes workings of the show and get into some talk about the Food Network Programing. We also get into some cryptic discussions concearning “The Rattlesnake”! What is “The Rattlesnake”? we will have to wait until Wednesday to find out!

Playlist:
I’ve Got A Plane to Catch- Michael Giacchino

DHARMALARS is a Fan Podcast that is dedicated to entertaining those of you who love the show LOST on ABC.

POSTS MARKED WITH ☤ HAVE FUNCTIONING LINKS TO EPISODES.